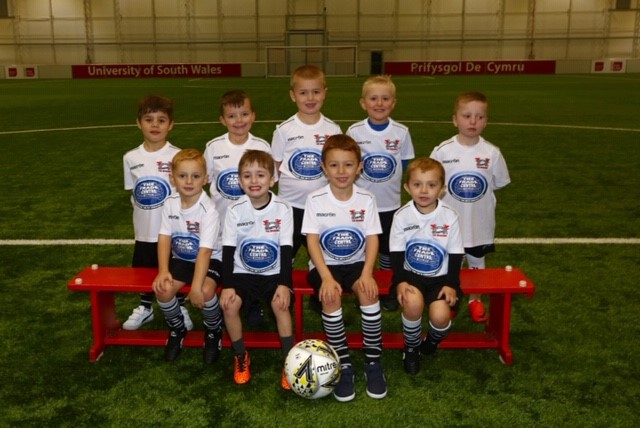 Pontypridd Town AFC has been successful in securing an advertising deal with The Trade Centre Wales, renewing the company’s support from the previous year.

The club has enjoyed a rollercoaster ride since its inception in 1991, as they climbed back into the newly named JD Cymru South League. Finishing 11th place in the 2018/19 season, after a heroic relegation battle. This season however is set to be different with the appointment of the new manager, Jonathan Jones. Bringing with him exciting new signings and opportunities.

As part of the sponsorship, the club received a brand-new kit for the Under 7’s team which was supplied by Macron store, Cardiff, under The Trade Centre Wales kit sponsorship scheme.

Max James, Football Advisor at Pontypridd Town AFC, said: “We are indebted to The Trade Centre Wales for providing the new football kit for these young players. Clubs like ourselves are always relying a great deal on the generosity of local businesses which allows youngsters the opportunity of playing and enjoying the game of football at grassroots level. Our young players thank The Trade Centre for their new kit.”

Andy Coulthurst, CEO of The Trade Centre Group, said: “We are extremely pleased to be sponsoring Pontypridd Town AFC again this season, and providing the Under 7’s team with a set of new playing kits. The Trade Centre Wales has become synonymous with providing vital support to grassroots teams across South Wales, and it has always been a priority for Mark, the company’s Chairman, to give back to local communities.”

As well as running a successful sponsorship scheme for local clubs and teams, The Trade Centre Wales actively participates in fundraising for NSPCC and support other local charitable initiatives such as Maggies Swansea, a cancer support centre.